I had to make a last minute decision on producing a game at the club today. Looking at the shelves I realised that I hadn't used the 28mm WW1 Salonika Front armies for a while. Then came the choice of rules. We had been using Great War from the Warhammer stable, but it occurred to me that Bolt Action might work just fine for the earlier period.

So, for the Central Powers we had an Austrian platoon of three squads and a HMG, plus a Bulgarian platoon of similar size. The HQ had a cavalry troop and a field gun attached. Similar size force for the Entente with a British platoon and a Greek platoon.

The scenario was skirmish on the Struma. The cavalry scouting in the Struma valley bump into each other around a small farm and both sides converge in an encounter battle. I have to say it worked very well, with no real modifications required. We might want to think up some special rules for a period feel, but you can play WW1 with Bolt Action, straight from the box.

My opponent picked up the mechanisms very quickly, as I find most players do and enjoyed it. Another convert to Bolt Action as he is off to buy the rules. He also benefited from some tutorials this morning on You Tube. I hadn't seen these before and they are very good. 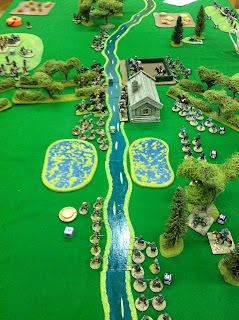 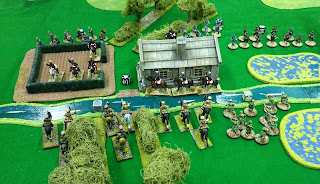