I was partially re-reading F.W.D Deakin's 'The Embattled Mountain', when I came across some inspiration for a Montengrin WW2 scenario.

Deakin was parachuted into Montenegro in May 1943 to command the first British military mission to Tito's headquarters and this is his memoir. He landed in the midst of a large scale German effort to trap Tito in the Mount Durmitor area. He describes how the partisans broke out of the encirclement. Deakin handed over to Fitzroy MacLean and his memoirs 'Eastern Approaches' are also worth a read.

The final recommendation is Michael McConville's 'A Small War in the Balkan's'. He was based on the island of Vis, off the Adriatic Coast and this was the British base for providing support to Tito. There is plenty of inspiration for coastal raids in this book.

Anyway, Deakin describes the importance of medical services to the partisans. In fact, because the British initially supported the Chetniks, medical supplies were the main support in the early years. The partisans carried their wounded because to be captured by the Germans or their allies meant almost certain death. They established a series of hospitals across Bosnia and Montenegro, camouflaged carefully and defended by special units. The German's understood the importance of these hospitals and prioritised their capture.

In the game pictured below the German's have discovered one such hospital and are mounting an attack with the Italians. There are two Italian infantry squads and one German squad supported by an armoured car. The hospital is defended by three inexperienced partisan squads with a mortar, HMG and AT rifle.

There was a tough fight for the outer perimeter but the last stand in the hospital was quickly over as Axis firepower and training prevailed. Having spent some time building and painting a Macchi 200 for air support, it failed to arrive even after 5 attempts to roll dice 4+!! 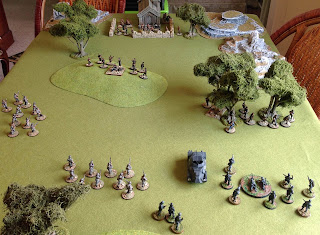 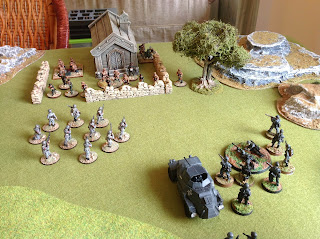