The Knights Move at Claymore

Off to Edinburgh tomorrow for the Claymore show. Thankfully the weather forecast is for a cooler day as it can get a bit warm in the atrium at the college. No excuses about the  weather, beach etc for anyone not attending one of the best Scottish shows.

The GDWS display game will be Raid on Tito. Our portrayal of Operation Knights Move, the German attempt to capture Tito at the Bosnian town of Drvar in May 1944.

As always some last minute painting. The Partisans were a bit short of firepower so a quick paint job on these Warlord figures including partisan LMGs and a Soviet 120mm mortar. 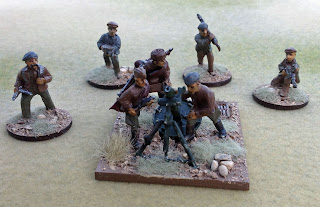 Also finished off this Greek (well French actually) 65mm Mountain Gun. It will make an appearance as well. My justification is that this is the Italian version of the Greek uniform and after 1943 the partisans pinched their kit in huge amounts. I have pictures of partisans who look just like Italians. Anyway, they will need something to stop the German paras given their rating in the Bolt Action rules. 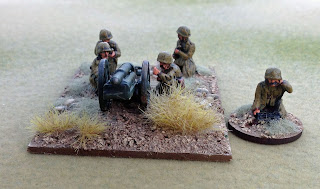 So if you are going to Claymore, stop and say hello.