My copy of Sam Mustafa's new rule set, 'Longstreet' arrived this morning. A rare opportunity to dust down my ACW armies and give these rules a go.

First a read through the rules. They are well laid out with plenty of diagrams to explain the key mechanisms. Unusually they come in A5 size, although the claim that they will open flat is a bit optimistic. Some nice eye candy as well, without overdoing it.

There is a good introduction to the rules in this month's Wargames Illustrated so I wont bother explaining the system. Those familiar with 'Maurice' will feel at home with the basics. I am not a huge fan of card driven rules, but here they don't make the game a lottery as some others do. You can fire, move and charge and the cards give an edge without dominating each turn. You do need to marshall your cards carefully as running out gives victory to your opponent.

My trial game used a basic brigade with three infantry regiments, a cavalry regiment and a battery of guns on each side. I chose 1862, as that gives a mix of eager recruits and seasoned veterans. I have one or two queries, but unlike Maurice I found these rules much easier to follow and play. A very enjoyable afternoon's play. I will certainly be giving these a go again. The campaign system would also work well in a club campaign.

My 15mm ACW collection is based for Fire and Fury and they work fine with no need to rebase - a real plus! Recommended. 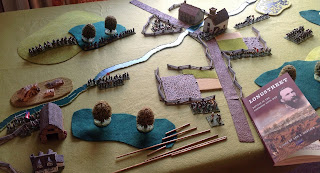 The basic table, with a small settlement and a stream. Plenty of woods and of course the distinctive fencing. 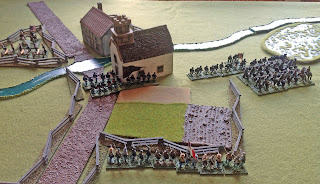 The rebel right wing goes for the church although the somewhat optimistic cavalry charge came a cropper - even with a decent card. As it should.