Beasts Beyond the Wall

I have struggled with historical fiction recently. Other than the old reliables like Bernard Cornwell, a lot of books have left me less than satisfied. So, I was pleased to see that my old wargame opponent, Bob Low, has turned out a new volume.

After a career in journalism, his Oathsworn series covered the Vikings well. Hardly surprising as Bob was a serious reenactor, and looks the part! His Kingdom series covered the Scottish-English wars, without the absurdities of Braveheart. His writing style is crisp and readable as you would expect from a journalist. On occasions, we get a little too much of his research, but after a while, you learn which parts to skip over. 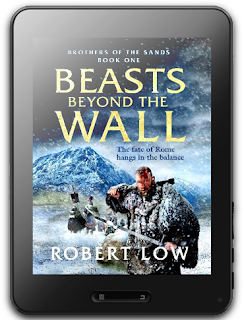 His latest book, Beasts Beyond the Wall, take him into a new period – the Imperial Romans during the rule of Emperor Severus (AD 208). Instead of taking the well-worn road of the legionary hero (Simon Scarrow et al.), he takes a group of freed Gladiators employed on a mission to rescue a Roman noblewoman and her son from the Picts.

The Emperor decamped the Imperial court to York, and he was campaigning in Scotland. Our heroes are on the edges of that campaign as they travel north. They do battle with the Picts and the intrigues of the Imperial Court, manoeuvring for power as Severus dies. They are betrayed and end up back as Gladiators in Rome. There is a grand escape, but I won’t spoil the story. It’s going to be a series so we can’t lose too many characters!

This is proper historical fiction. The characters are adequately developed, and historical accuracy is not abandoned. Roll on the rest of the series.