When we think of British army commanders during the Napoleonic wars, the names of Wellington and his generals are likely to top the list. Carole Divall has reminded us, in a new biography, of Britain’s pre-eminent soldier during the French Revolutionary Wars – Sir Ralph Abercromby. 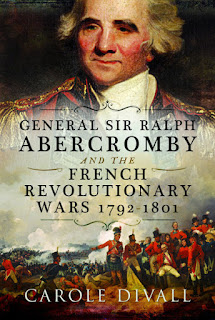 I first became aware of Abercromby when researching and collecting armies for Napoleon’s campaign in Egypt and the subsequent British intervention, during which Abercromby died. Captured in a stunning painting on the book cover, although he actually died on board ship after the battle.

This book is less a biography of Abercromby and more a study of British involvement in the French Revolutionary Wars 1792-1801. A conflict that has been largely eclipsed by the great events that we generally call the Napoleonic Wars. Abercromby is involved in most of the primary campaigns, but the author puts his actions in the context of British policy. ‘Perfidious Albion' was a consistent opponent of the revolution, but the means of waging that opposition often split the government. Some favoured intervention in Europe, directly and through subsidies - others an indirect approach that captured colonies and strengthened British trade and commerce.

The chapters in the book take the reader through the campaigns Abercromby was engaged in. This results in some very long chapters, but you get plenty of context including the all-important social and political history.

Ralph Abercromby was born in Scotland, studied at the Universities of Edinburgh and Leipzig. He decided on a military career and served in the 3rdDragoon Guards in the Seven Years War. By the standards of the time, he was a liberal and didn't serve in the American Revolution.

He commanded a brigade under the Duke of York in the first campaign of the revolutionary wars. The Duke of York was an able administrator, but not a field commander. Abercromby was one of the few who came out of the 1793 Netherlands campaign with any credit.

After the failure of the First Coalition the colonialists had their way with a campaign in the West Indies, commanded on land by Abercromby. As Spain had declared war against Britain, the Spanish and Dutch islands were up for grabs. Slave uprisings added to the confusion and the campaign had to secure British possessions as well. Disease was a more significant threat than enemy action, not helped by the plantation owners refusal to support locally recruited regiments.

The fleet suffered many weather-related disasters en-route, and Abercromby did have a good working relationship with the navy, a rare feat during this period. It was in this campaign that he also struck up a friendship with John Moore, who was to serve with him as a Brigade commander in all his campaigns.  Abercromby achieved the pacification of British islands, reconquered St Lucia and captured Trinidad. However, he failed to take Puerto Rico, and it is doubtful if these modest gains justified the high losses.

For those who like a ‘what-if’ campaign, Abercromby then tried to persuade the government to support a war of liberation in South America.

After returning to Britain in 1797, he was appointed to command the army in Ireland.
A poisoned chalice if there ever there was. Ireland was ruled by the Protestant minority who used the yeomanry and other forces to terrorise the Catholic majority.
Abercromby attempted to instil some discipline into the army, but came up against the Protestant establishment and decided to resign his command.

The 1797 Second Coalition campaign in the Netherlands, again saw Abercromby leading the advanced guard under the Duke of York. This was another poorly equipped and planned campaign that achieved little other capturing the Dutch fleet and blooding the army. The weather was appalling, and the anticipated Dutch uprising failed to materialise.

As peace talks started, Abercromby was in the Mediterranean, initially to support the Austrians in Italy. The government did not want to leave the French in control of Egypt, so Abercromby’s army was diverted to Alexandria. Napoleon had long abandoned his troops there, although Menou still commanded a formidable force of veterans.

In a well-organised campaign, he defeated the French, and the army went on to capture the whole of Egypt. Abercromby was mortally wounded in the Battle of Alexandria and died later on the flagship HMS Foudroyant. He was buried in the fortifications of Valetta harbour in Malta, and there is a memorial to him in St Pauls Cathedral.

The final chapter appraises his career sympathetically. It had more positives than negatives, and he undoubtedly helped create the army that went on to greater success in the Peninsular and elsewhere.

As the Duke of York said:  "His steady observance of discipline, his ever-watchful attention to the health and wants of his troops, the persevering and unconquerable spirit which marked his military career, the splendour of his actions in the field and the heroism of his death, are worthy the imitation of all who desire, like him, a life of heroism and a death of glory."

This is an excellent study of a commander and a conflict that has mostly been forgotten. It is well written and thoroughly researched. Highly recommended.

It also gave me an excuse to dust down the wargame armies I collected for the GDWS display game at Claymore in 2010. Rebels and Patriots may not have been designed for this theatre of operations, but they worked very well. 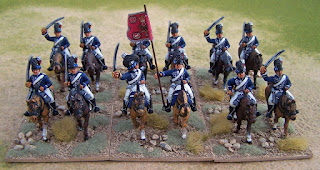