At the Forward Edge of Battle

This is a two volume history of the Pakistan Armoured Corps 1938-2016, by Major General Syed Ali Hamid. There are a number of interesting aspects of the Indo-Pakistani Wars, but the real attraction is the large scale deployment of tanks. So these volumes, in the Helion Asia@War series, are very welcome. 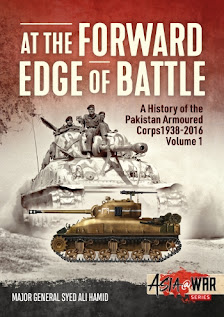 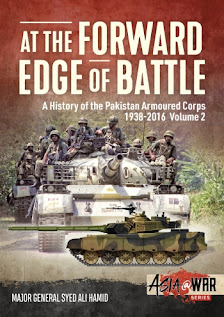 The first volume starts with the early mechanisation of what was then the British India Army, prior to WW2. In 1937, there were 18 cavalry regiments in the British India Army, and only two were mechanised by the outbreak of war in 1939. The Indian Army was not the highest priority for armoured vehicles even after the war broke out in Asia. However, cavalry regiments were mechanised and served in most theatres of war, most famously in the Middle East and latterly in Burma.
At partition, the Pakistan armed forces arguably got the worse of the equipment split, and many regiments split on religious lines. The newly created corps was quickly into action during the First Kashmir War. The early equipment was WW2 British and US armour, until the 1950s when US Lend-Lease started to arrive. This introduced M47 and M48 tanks along with M24 Chafee's in the reconnaissance role, and the less modern M36B2 tank destroyers. However, Shermans remained in service until 1980, albeit with some improvements. On the eve of the 1965 War, just over 1000 tanks had been received from the USA.
The second volume begins with chapters on the recruitment, training and doctrine of the corps. Then chapters on the 1965 and 1971 Wars, which saw some of the largest tanks battles since the Second World War. The supply of equipment largely reflected Pakistan's foreign policy stance, which after 1965 shifted from the USA to China. This brought large numbers of T59 tanks and later T85s. The M47s left after 1971 were upgraded in Iran and the army also received a handful of Russian T34/85, T55, and in 1996, T80's from Ukraine. Captured Indian AMX13 and PT76 tanks also served.
From just six armoured regiments at independence the Pakistan Armoured Corps mushroomed to 42 regiments by 1995. These were deployed in armoured and mechanised divisions, but others were organised into armoured brigades serving independently or attached to infantry divisions.
Both books are profusely illustrated with period photos and colour plates by David Bocquelet. Tank crews on occasion found it difficult to differentiate between Indian and Pakistan tanks, which can be a challenge for the wargamer as well, particularly when you choose 1/285th scale! The colour plates give some camouflage variants which will help enormously.
The author spent half of his military career with the armoured corps, including the command of a mechanised division. If you are only interested in the 1965 and 1971 Wars then volume 2 will do. However, both are worth reading to fully understand the development of this fighting force.