Digging deep into my 'to read' shelf this week, with Jon Diamond's Osprey campaign book on Stilwell's assault on Myitkyina in 1943-44. 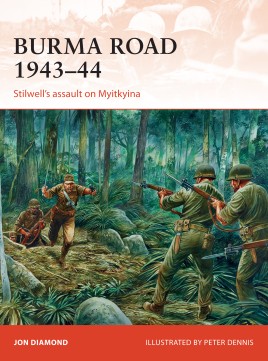 The retreat from Burma in 1942 had left the supply line to China, the Burma Road, dangerously exposed to the Japanese. Northern Burma was occupied by the experienced Japanese 18 Division (three regiments), which although on the strategic defensive was aggressively patrolling northwards. Japanese planes based at Myitkyina could also intercept US transport aircraft taking supplies over 'The Hump' into China.

The cutting edge of Stilwell's planned offensive to capture Myitkyina was Merrill’s Marauders (named after its commander Frank Merrill) or Unit Galahad, officially named the less than glamourous 5307th Composite Unit (Provisional). They had been modelled on the Chindits to perform similar long-range penetration operations in combat command sized groups. They had very few support weapons, which gave them limited punch compared with a normal US infantry battalion. This would prove to be a challenge when fighting a conventional, and dug in, Japanese division.

My awareness of this campaign is probably framed by my recollection of the 1962 film Merrill’s Marauders. It captures the sheer length of the penetration over jungle and mountain terrain, particularly the last mountain haul to Myitkyina. It ends with the capture of one of the airfields in May, but I didn't appreciate that the town did not fall until the end of August. This was after a prolonged siege, although in fact, Stillwell's force was itself surrounded by enemy-held territory. US intelligence consistently underestimated the size of the defending forces, which could be supplied over the river until the British cut their line of supply at Mogaung on 26 June.

I suppose it is inevitable that the film focuses on the Marauders, but we should recognise that Stilwell deployed several combat engineer battalions in the siege of Mitikyina. US casualties totalled 2,207. The Marauders were also supported by Japanese-American translators, and crucially, Kachin tribesmen, who guided them through the terrain. Equally important, and often forgotten, was the combat role of Chinese infantry divisions, who sustained 4,344 casualties. The Japanese lost 790 killed, 1,180 wounded and 187 captured. The effectiveness of the campaign and Stillwell's command decisions are the subject of some controversy, and this is covered in a very balanced way.

This book has all you need to understand the campaign. ORBATS, great maps and plenty of photographs, as well as colour plates by Peter Dennis. I don't have many US troops for this theatre of operations, but plenty of Chinese and Japanese in 15mm and 28mm.