Further delving into the depths of my 'to read' shelf, and I found this book by John Goodwin. I picked this up at the Scottish model railway show back in Fenruary at a very attractive price. Ah, shows, those were the days! 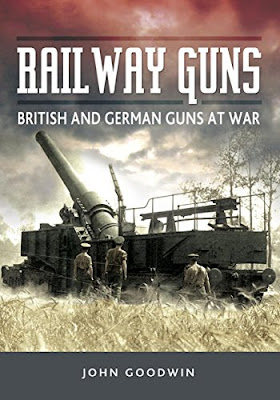 Mounting artillery on rails goes all the way back to 1847 when an Edinburgh inventor patented the idea of putting a 32-pounder gun on rails. The Duke of Wellington as C-in-C of the army was not impressed with the idea or the cost at £1m. It wasn't until 1894 that a privately funded scheme got onto the rails at Brighton. They used a redundant Armstrong field gun and a 20-ton flat wagon, and it was used in field exercises to defend the south coast against a possible invasion.

The heavy rail-mounted artillery came to the fore during WW1 with 13 batteries going to France. They were used to bombard strong points, dumps and assembly points far behind enemy lines. The slow rate of fire and limited traverse restricted their use, as well as the need to strengthen railway lines. The Americans, French and Germans also used railway guns, although in smaller numbers. The most famous German gun could fire at Paris from 80 miles away.

They were used again in WW2 when an array of guns were assembled to defend against invasion. Special sidings were developed across Kent and Sussex, which enabled most of the potential invasion beaches to be targeted. Guns were often hidden in tunnels to avoid air observation and diesel locomotives towed them without the tell-tale smoke. Guns could and were used to shell each other across the Channel. The Germans had developed new railway guns and built special bunkers for them in the Pas de Calais. They used turntables to get around the traversing issue. The K12 210mm railway gun had a range of 71 miles.

This book is a lovely piece of research. Profusely illustrated with a wide range of railway guns used in both world wars. Primarily British, but plenty of German photographs as well. A fitting tribute to a weapon system that has largely been forgotten.