For someone who doesn't often play board games, I have been playing another this weekend! This is another Strategy & Tactics game, this time covering a German plan for the invasion of Turkey, 'Operation Gertrud'.

Implied by Fuhrer Directive 32, it was prepared in the summer of 1942. It was planned to start from Greece and Bulgaria in the west, from Syria in the south and from the Caucasus in the Soviet Union. These starting points assumed Kliest's drive into the Caucasus would be successful as well as Rommel in North Africa. In retrospect, Operation Gertrud looks pretty ambitious. However, these were the heady days of Blitzkrieg and other ambitious plans had been successful.

Operation Gertrud had a big sister in the form of Operation Orient, which envisioned a link up with Japan through the Middle East. After the capture of the Caucasus and North Africa, they would link up with the Japanese in India. This plan was cancelled in early 1943.

The game has a lovely map, always useful, with each hex covering 36 miles. The counters are mostly divisional size units. Most of the Turkish army is based in Thrace, including the best units, facing several German panzer corps and Italian allies in Greece and Bulgaria. Interestingly, there are no Bulgarian units, I assume on the basis that the Bulgarians had a non-aggression treaty. I am not convinced that would have held in this scenario, and neither did the Turks at the time. 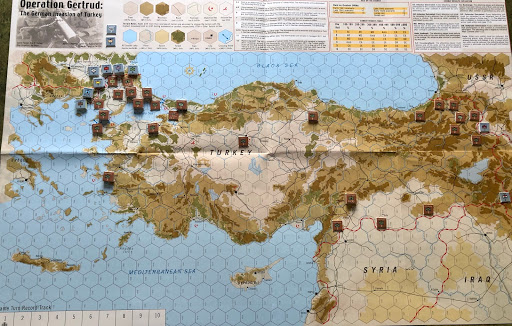 The game provides a number of scenarios from Late 1941 to Early 1943. Some of these involve the Soviet Union, including what I would call the 'Poland Option' of the Soviets taking advantage of the German invasion to attack Turkey in the East.  The Turks always regarded the Soviet Union as their primary concern. There are also a few special missions involving the Dardanelles and a commando raid to capture President Inonu.
The game mechanics are very straightforward, with a simple combat system. With a range of options, this makes an interesting game. I have only played once so far, and I suspect it is going to be difficult for the Turkish side to win. I am tempted to try abandoning Istanbul and holding the Straits as a defensive line. It would have been politically very difficult for Inonu to do this in reality, but it looks like the only practical military option.
The game inspired me to finish another Turkish unit in my 15mm project, as well as order some of the later equipment options for the Turkish army. A game of Blitzkrieg Commander is next.