This book by Metin Tamkoc looks at how the Turkish Republic's objectives over a period of around 50 years (the book was written in 1976) were achieved by the presidents and their principal advisors, who he calls the 'warrior diplomats'.  This is because nearly all of these leaders came out of what Turkey calls the National Struggle, the Turkish War of Independence, or the Greek-Turkish War of 1919 to 1923. 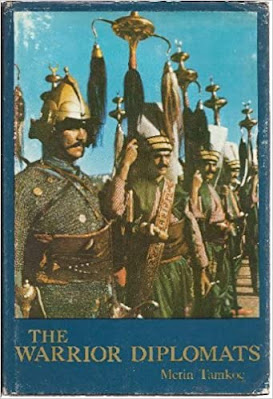 Foremost of these was the first President of the Turkish Republic, Mustafa Kemal. He was followed by Ismet Inonu, also a trained soldier who joined the nationalists in 1920 and won the critical Battle of Inonu, ending the war as a Lieutenant General.  It was Inonu who steered Turkey through WW2 and became 'The National Chief', just one step behind Ataturk who was given the title 'The Eternal Chief'. These men were advised by a relatively small number of men in foreign policy and military positions, most of which had a military background.
Unsurprisingly, these men were not democrats in the western democratic tradition. They created an authoritarian system of government in the tradition of the Ottoman state they succeeded. They modernised the state, slowly and cautiously by authoritarian methods. The Grand National assembly existed, but it was the President who called the shots. The author illustrates this with the story of the 'Moustache Revolution of Inonu', who ordered all his ministers to shave off their moustaches in 1943. Shades of Peter the Great and the Boyars beards!
These leaders gave foreign affairs primacy over domestic policies. Not least because Turkey is located at the crossroads of international politics. They pursued a policy of 'Peace at home and peace in the world'. However, they recognised that this required strong armed forces, the cost of which undoubtedly had a negative economic impact.
During WW2, they maintained large armed forces in a mode that they called 'belligerent neutrality'. Each allied victory after 1943 made it more difficult to resist Allied pressure to join the war, but they managed to hold off until February 1945. Their primary concern was always the Soviet Union. Despite the early flirting with communism, these leaders were anti-communist, some even pro-German, and containing Soviet expansionism was their main aim. After WW2, they quickly dropped neutrality and lobbied to join NATO.
The fundamental objective of these warrior diplomats was to modernise Turkey to contemporary standards and to protect the territorial integrity and political independence of Turkey. Something they largely achieved.
While there are several good studies of Turkish foreign policy during this period (Weber, Catherwood, Deringil and Weisband), this book focuses on the personalities. This probably makes it more readable than similar studies, and I found it very useful for my current projects.
Posted by Balkandave at 16:10