This is Mark Simmons’ take on the story of Agent Cicero, who was arguably Germany’s most successful spy in WW2. Cicero was the code name for an Albanian, Elyesa Bazna, who was the British Ambassador to Turkey, Sir Hughe Katchbull-Hugessen’s valet. I have read the memoirs of his German handler, Ludwig Moyzisch, which was largely confirmed by the German Ambassador Von Papen. However, this book takes a wider look including the now released US and British files. 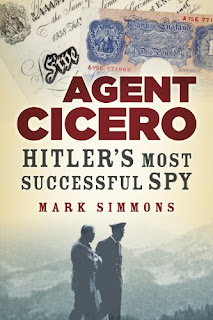 Given that this was wartime and Turkey was a nest of spies, it seems quite astonishing that Basna was employed without any serious checks being made on his background. Helped by the fact he was a ‘walk-in’ spy motivated by money, rather than a trained spy. The Germans, at least in Berlin, thought he might be a British plant, but the quality of the documents he copied from the Ambassador’s box persuaded most that he was genuine. However, power struggles in the German hierarchy undermined the use of the material, and they drew the wrong conclusions or took no action.

The most important documents were the minutes of the big wartime conferences, including Moscow, Cairo, Tehran and Casablanca. It may also have helped with breaking some minor codes and certainly helped gain a better understanding of Turkey’s position on entering the war. In particular, it undermined deception operations that aimed to persuade the Germans that the allies might land in the Balkans. Even the planned date of Operation Overlord was disclosed through this route.

The Germans largely paid Basna in forged notes. These were printed by forgers based in a concentration camp (Operations Andrea and Bernhard), which were originally aimed at undermining economies but later were used for intelligence operations. There use resulted in two agents being captured in Egypt and a double agent was parachuted into England with notes that still had bands stamped ‘Reichsbank Berlin’ on them. These were elementary errors that add to the poor reputation of German intelligence in WW2.

There was an attempt to cover up the failure of security by claiming Basna was a double agent. This is clearly untrue and MI6 later admitted ‘the potential damage was enormous’.

The story of Cicero has been told by Basna himself in his 1961 memoirs as well as by the key players, Moyzisch and Von Papen. Given his dismal failure to follow basic security procedures, Sir Hughe understandably avoided mentioning it in his own memoirs or later! The excellent film Five Fingers, starring James Mason, is largely based on the Moyzisch account, and there are links to other works of fiction including From Russia With Love and the Guns of Navarone.

This book takes an objective look at the story using a range of sources. It also makes a very good read about what was Germany’s greatest intelligence success of the war.