Soldier of the Queen

This is the first in Max Hennessy's fictional series on the Goff family. It is set in the second half of the 19th century and the hero is Colby Goff, an officer in the 19th Lancers based in Yorkshire. Not a bad choice for a fictional regiment as the 19th Light Dragoons did convert into lancers in 1816, although they were disbanded in 1821, long before this book begins. 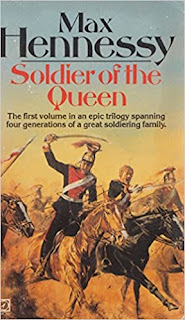 So, where to start a book about British lancers? Balaclava 1854 of course, where the young Goff is with the Light Brigade in the Crimea. He of course survives, albeit wounded. A recovery back in the family home at Braxby (actual place by the way) in Yorkshire and some, well described, but routine regimental duties.

Partly to avoid the marriage advances of a local girl, he is off to America as a correspondent with the Morning Post to follow the American Civil War. He starts on the Union side and then moves to the Confederate cavalry of Jeb Stuart. He gets a bit hands-on for a British officer, but it makes a better read!

Back home after another wound, he meets the up and coming General Garnet Wolseley who sends him to France to observe the Franco-Prussian War. He manages to get to both sides and ends up in the massive cavalry battle at Mars-la-Tour. Later he is in the Paris Commune. If this all sounds a little unlikely, it actually isn't. British, and other nations, officers in the late 19th century often swanned about Europe turning up in other people's wars. A number wrote books or at least articles on their adventures.

Back home he followed Wolseley to the Ashanti Uprising becoming one of his famous 'ring' of acolytes. I was hoping he might turn up in the Russo-Turkish War next. However, instead, he was off to South Africa to take on the Zulus.

This is an entertaining romp around 19th century warfare. Not a bad nighttime read with just enough facts to make the fiction bearable. I can't say I will follow this series through but not a bad read.

I sold off my Crimean war figures some time ago. However, the Zulus are a project half completed after my visit to Zululand last year, and the lancers are done. 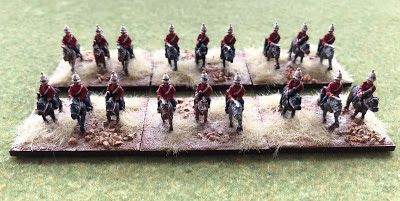