This 1973 book by Edward Weisband is probably not one for the general reader. In fact, my copy was released by an American college library and I see from the slip that no one took it out! Which is a shame because it is a very impressive piece of scholarship. 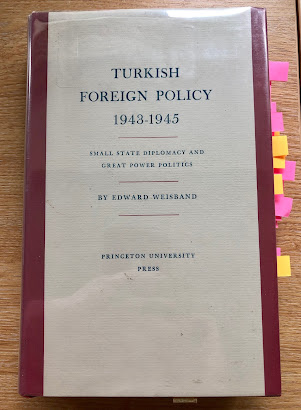 It is not entirely clear to me why the author decided to start his analysis in 1943 rather than at the start of WW2. It may be a question of space, and it was the case that 1943 was a crucial year in the narrative of Turkey's involvement in the war. He includes a quote that I don't remember in Kinross's classic work on Ataturk, taken from a conversation with Douglas MacArthur in 1934. Ataturk predicted that war would break out around 1940 and that Germany would occupy all Europe other than Britain and the Soviet Union. He also declared that the Soviets would be the 'real victors' arguing that "The Bolsheviks have now reached a point at which they constitute the greatest threat not only to Europe but to all Asia."

Apart from the remarkable foresight, this view formed the basis of Turkish foreign policy throughout the war, and afterwards. The primary threat to the security of Turkey was the Soviet Union.

The other principle was peace at home and peace abroad. This was to enable national development to be prioritised over expansionism. This was in many ways remarkable for a political elite made up almost entirely of soldiers. A point covered well in Metin Tamoc's book, 'The Warrior Diplomats'. Having said that, I think Weisband is too accepting of this theme in the book. There are many times during the war that Turkey sought to expand its borders, pressing either the Germans or the Allies, depending on the state of the war at the time. Even if you dismiss, as Weisband does, the influence of Pan-Turanism (the expansion of Turkey to Turkic peoples in neighbouring countries, mostly Soviet republics), Turkish diplomats did press for territorial revisions in Bulgaria, Iraq, Syria, and the Aegean and Dodecanese islands.

Their focus on the Soviet Union didn't mean they ignored other threats, including Bulgaria, Italy and Nazi Germany. In particular, I hadn't appreciated that in 1935 Mussolini indicated a wish to annex the region around Antalya. British tourists today might be tucking into Pizza at this popular resort if matters had gone differently! Turkey may not have entered the war until February 1945, but its army was mobilised for most of the war.

The author takes the reader through the various diplomatic stages with Churchill being the main driver of the Allied policy to get Turkey to enter the conflict. The Americans were not really bothered and more concerned that it would be a resource distraction from the Italian campaign and later Overlord. The Soviets faced both ways but latterly were also opposed. Turkey outside the war would be an easier target in the post-war settlement for their claims in eastern Turkey and the Straits.

Weisband describes the Turkish policy for avoiding entering the war as 'Operation Footdrag'. There was always another reason, diplomatic, military or practical to defer the decision. They did succeed in getting some modern weapons from Germany in return for Chromite shipments, and even more from Britain and the USA. However, the Turkish army had major deficiencies, which could not all be resolved with tanks and aircraft.

For most of the war, at least other than 1942, Turkish neutrality was exercised marginally in favour of the Allies. The Turks accepted the principle of their treaty obligations to Britain, even if they wriggled out of them militarily. This became more pronounced in the latter stages of the war when it became clear that the Allies would win.

This is a sympathetic study of Turkish diplomacy in the second half of WW2. In the end, Weisband concludes that Turkey played small state diplomacy rather than Great Power politics and survived the conflict.

I am working on the 1943 additions to the Turkish army this week for my 15mm project. A delivery of 3D printed models means there is much cleaning up to do! 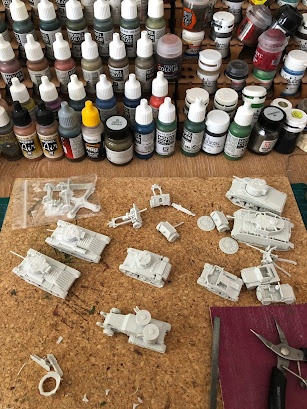