God's Shadow: The Ottoman Sultan Who Shaped the Modern World

This is Alan Mikhail's new book about Selim 1, sometimes known as Selim the Grim or Selim the Resolute, the Ottoman Sultan from 1512 to 1520. In western historiography, he tends to be eclipsed by his son, Suleyman the Magnificent. This is probably because his focus was the Middle East rather than Europe. However, he nearly tripled the size and population of the Ottoman Empire in his short rule, and so deserves greater attention. 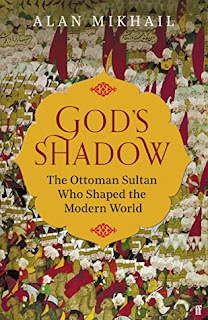 Selim was a younger son of Bayezit II, which meant he was destined for a short life once his older brother took the throne. His father favoured his older brother but Selim from his base as governor of Trabzon revolted against his father and forced him from the throne, killing his other brothers.

His experience in the east gave him a focus against the Persian Safavids and he led several successful campaigns against them, including the decisive Battle of Chaldiran. The Safavids had brought Shia Islam to Persia and Selim was a devout Sunni. He also persecuted Shias within the Empire. For Selim, the Venetians, Spanish and Genoese were secondary enemies, the paramount enemy was the heretic Safavids who offered an alternative vision of Muslim power.

Having defeated the Safavids he turned his attention to the waning Mameluk Empire. His victory at Marj Dabiq (near Aleppo) in August 1516 enabled the conquest of Syria and the Levant, including Jerusalem. The Battle of Raidanayya in January 1517 opened the way to Cairo and the conquest of Egypt down to the Indian Ocean. In Yemen, Selim’s army found coffee. Few people, at least in the West, quite appreciates that an Ottoman sultan made coffee the global phenomenon it is today.

This led to the further expansion of the Empire along the coast of North Africa supported by the Barbarossa brothers. This brought him into conflict with Spain and he died before attempting the invasion of Morocco and the Spanish enclaves on the coast. So, by this huge expansion of the Empire, it was Selim who created the imperial infrastructure that allowed Suleyman to become one of the most significant sultans in Ottoman history.

Mikhail also argues that Selim caused the Spaniards and English to look towards the Americas for colonial expansion. Columbus and John Smith both fought the Ottomans and many of the Conquistadores ended their careers fighting the Ottomans in North Africa. He even argues that had Selim lived, he would have challenged Spain in the Americas and the Portuguese in Africa. He makes a link between modern-day hostility towards Islam in the West to Selim's expansion in the 16th century.

This is a great book on a lesser-known Sultan whose achievements were indeed enormous. I am less convinced about the 'shaped the modern world' argument, but I see the link. Well worth a read and when you drink your next cup of coffee, say thanks to Selim!