This is another book that has been sitting on my 'to read' shelf for some time. Edited by Peter Tsouras, he uses a number of studies written by former German generals for the US Army after WW2. The focus in this book is officers who had extensive experience of the eastern front. They are written by Germans and from a German point of view, translated but not interpreted by American personnel. They provide an interesting insight into combat on this front. 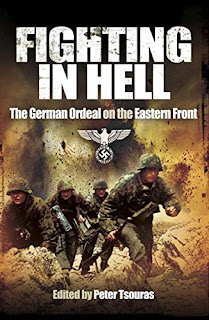 The main study is written by Erhard Rauss on Russian combat methods, followed by his views on the effect climate had on combat in European Russia. The other studies are on warfare in the far north and combat in forests and swamps.

One of the biggest surprises, to me at least, was how ill-prepared the German military was for fighting in the East. The General Staff had taken no interest in the history of wars in the north and east of Europe. I naively assumed their much-vaunted efficiency would have included the possibility that German troops might at some stage be required to fight in these regions. At the very least you would have thought some hurried work would have been commissioned in late 1940 when Hitler first indicated that he was considering such a move.

This is vital because, as General Rauss puts it, 'he who steps for the first time on Russian soil is immediately conscious of the new, the strange, the primitive. The German soldier who crossed into Russian territory felt that he entered a different world, where he was opposed not only by the forces of the enemy but also by the forces of nature."

Putting to one side the racial stereotypes that you might expect from a German officer of the period, these are fairly objective studies, albeit omitting the atrocities they also committed. All the Russian tactics are covered, supplemented by examples from actual operations. These include a number that I have never heard of, including the practice of setting large areas of forest on fire. One German brigade was nearly wiped out by a fire on the Luga River in 1941.

Like the editor, the description of the fighting in the snow reminded me of Laurence Oliver's haunting commentary in the World at War television series. I haven't read much about the war in the far north, the Continuation War, in Finland. Apparently no German tank or self-propelled gun ever saw service north of the Arctic Circle. The description of how the German troops adapted to the conditions is fascinating, as is the way the Russians had learned from their mistakes in the earlier war.

This is not your usual narrative military history book. The focus is on tactics and logistics, both on land and in the air. A rare insight into the mechanics of fighting in what really must have been hell for the soldiers on both sides.