A bit of a break from WW2 with a book that has been sitting on my reading shelf for some time. Not that I wasn't interested, it's just that it might spark a burst of wargamers disease and I have quite enough projects! 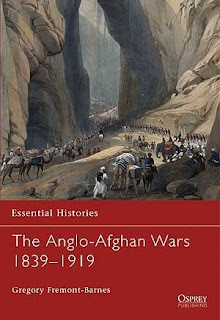 Warfare in and on the borders of Afghanistan during the period and beyond was common. However, there are three specific campaigns covered in this book - 1839-42, 1878-81 and 1919. As the author puts it, "The wars were marked by varying degrees of political and military incompetence and brilliance". Most of them were also unnecessary, as the causes had often disappeared by the time troops were dispatched, and diplomacy would have been a better solution.

The First Afghan War is probably the best known, not least because of the outstanding paintings, many of which can be seen in the National Army Museum. This is a good example of incompetence, exemplified by the retreat from Kabul in January 1842. A force of 690 regulars, 3,800 sepoys and sowars, and 12,000 camp followers attempted to fight their way through the mountains of Afghanistan in winter. One doctor survived to reach Jalalabad. The painting of the last stand of the 44th (East Essex) Regiment at Gandamak says it all.

The Second Afghan War was shaped by the 'Great Game', played out between Russia and Britain over Central Asia. Not for the first time, colonial administrators reverted to military action when diplomacy would have delivered the buffer states that both sides needed. Militarily this conflict involved a regular army on the Afghan side, including 62 regiments of infantry, supplemented by the traditional irregular tribesmen. The British had learned some lessons from earlier conflicts and had learned to capture the high ground before sending long columns through the infamous passes. The signature disaster was the Battle of Maiwand on 22 July 1880.

The Third Afghan War, and probably the least well known, was fought just after WW1 when most of the best units of the Indian Army had been fighting elsewhere. British units were mostly territorial replacements who understandably wanted to go home, not fight in Afghanistan. In addition, the local militias largely collapsed. The British made up for this with technology. Not just artillery and machine guns, but aircraft. The Afghan 'invasion' of India was repulsed, although they gained their key demands in the peace treaty.

A particular strength of this book is the way it brings out the common themes in the campaigns. The Afghan geography and distribution of its people, as well as the climate that ranges from sub-zero in winter to 110F in summer. This breeds a particularly tough people, made up of many different tribes with little love of central government, particularly when it is imposed on them from outside the country.

These are challenges that still face modern armies, as the Soviets and NATO have found.

Needless to say, I have been powerless to stop another outbreak of wargamers disease. Having painted British armies for the Zulu and Boer Wars, I can do most of the Imperial side. An order has been placed with Pendraken for hordes of Afghan tribesmen - plenty of white paint will be required! 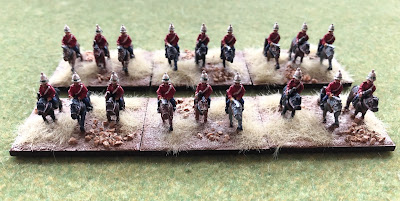 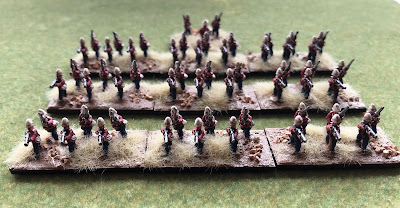