On the eleventh hour of the eleventh month every year, we commemorate the end of WW1. This new Osprey and others demonstrate that WW1 didn't really end in November 1918. Conflicts involving large armies continued for several years. In this example, Phoebus Athanassiou gives us an overview of the operations and armies that fought in the regions around the northern Black Sea coast in 1918-19. Specifically in Ukraine and Crimea. 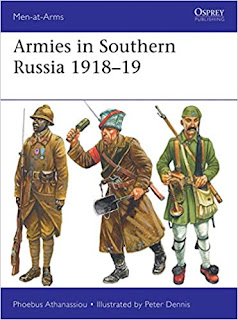 The Bolshevik or Red armies included separate Ukrainian and Russian forces. The German occupation forces were leaving but still engaged in places. Against the Bolsheviks were the White forces led by Denikin, supported by intervention armies from France and Greece. This is large scale warfare with Denikin's armed forces totalling some 160,000 men, 600 artillery pieces and 34 armoured trains. The French were quickly bundled out of Crimea, not helped by a naval mutiny, which reflected the low morale of French forces. Probably more war fatigue than Bolshevik agitation. The Allies attempted to hold southern Ukraine cities including Nikolaev, Berezivka and finally Odessa. However, they were pushed back and either evacuated or moved to new defensive lines with Romanian and Polish troops in Bessarabia.

Around 12,000 French troops were committed to the campaign - 156th infantry division, part of the 30th division and the 16th Colonial Division. This meant Algerian, Senegalese and even Indochinese units served in General Berthelot's army.

I had no idea that the Greeks sent an expeditionary force to the region, particularly given their commitments in Thrace and Anatolia. However, some 23,000 men were sent in two infantry divisions. (10th and 13th). Smaller numbers of Polish and Romanian troops also fought in the region, and were only interested in defending their own borders.

Denikin's army was large and diverse, although the French believed only about 25,000 could be described as operational. Former tsarist officers were fairly reliable but the mass of peasant conscripts were not. Having said that, his army performed much better after this campaign in the Russian Civil War.

As you would expect from this Osprey series, the book is well illustrated with period photos and colour plates. If you like to wargame an obscure conflict, this book has everything you need.