My WW2 eastern Mediterranean research inevitably references Cyprus. Although its strategic position remained important, it was just too far away from Axis bases in the Dodecannese to play a key role in WW2 campaigns.  Current tensions with Turkey over oil and gas around Cyprus caused me to look at the events that led to the partition in 1974. My first overseas trip was a school cruise in 1967, which included a stop at Famagusta because the planned trip to Israel was diverted due to the Six-Day War. I remember looking at the UN troops near the old town, keeping the peace between the Greeks and the Turkish enclave.

A quick search on the subject of the Turkish invasion in 1974, or peace operation as Turkey describes it, delivers a vast amount of less than objective analysis from both sides. Although the Greeks are more prolific, in English at least. I quickly read Dylan Casper Jones booklet, 'The Cyprus-Turkey War 1974'. He was a British soldier stationed in Cyprus in 1974 and took part in British operations to protect their bases and related sites. It includes a potted history of the conflict, although it's a bit disjointed in places and not entirely accurate. However, from a 'boots on the ground' perspective, it is an interesting read. 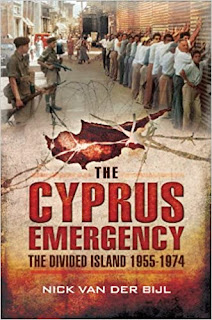 My current reading is 'The Cyprus Emergency' by Nick van der Bijl. This is a narrative history of the island and the campaign against the British occupation, which turned violent in the 1950s. This was led by the insurgency group EOKA, which wanted the island to join with Greece, known as Enosis. Unsurprisingly this was opposed by the Turkish minority, who formed their own militia to defend Turkish areas of the island. The British largely defeated the insurgency, and the Republic of Cyprus was created in 1960. The constitution involved power-sharing between the two communities under President Makarios, but the country was plagued with inter-communal violence. In the 1970s, EOKA was reformed and started a new insurgency aimed at Enosis, opposed by the Makarios government. In 1974 the Greek Junta encouraged a coup by the Cypriot National Guard that deposed Makarios and appointed a pro-Enosis President. The Turkish Cypriots called for Britain and Turkey to intervene as the treaty guarantors. Turkey took this opportunity to invade and occupy the northern third of the island, which resulted in massive population exchanges. In 1983, the Turkish Cypriots created the Turkish Republic of Northern Cyprus, which is only recognised by Turkey.

This is a good narrative history and gives an overview of the military operations in 1974. However, for wargaming purposes, it lacks operational detail. For that, I turned to Ed Erickson and Mesut Uyar's book 'Phase Line Attila', which I have as a PDF, although hard copies can be purchased. 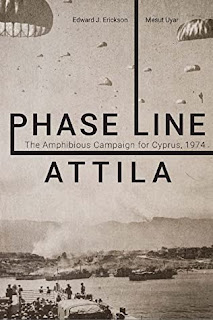 Erickson writes operational history like few others, and this is the best available study of the invasion I have found. I would have liked a little more organisational detail, but I also found some army lists that plugged the gaps.

For the tabletop, I had planned on using my modern 1/300th scale Turkish and Greek armies. However, the Cypriot National Guard was equipped with a mixture of older British and Soviet equipment. My 1/200th scale Arab-Israeli conflict models fitted better, supplemented by British desert army units. The Turkish army and marines were largely equipped by the USA, while the Cypriots had an eclectic mix of equipment. Marmon Herrington armoured cars fought side by side with T34/85 tanks and BTR-152 carriers.

I use the Cold War Commander rules for this scale. Unfortunately, there were no army lists on the website, so I created my own based on a reinforced Turkish marine battalion and a Cypriot infantry battlegroup. As in the historical action, Turkish airpower was important, negating the marines lack of heavy equipment. 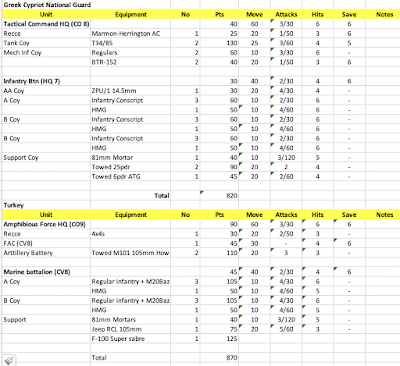 Once the Turks had captured the port of Kyrenia, they were able to bring in M47/48 tanks who spearheaded a two-stage offensive, which gradually pushed by the National Guard units who had little with which to stop them. The modern Greek Cypriot forces now have a much better-equipped army to face the two Turkish divisions that garrison today's occupied territories. The invasion in 1974 also involved paratroop and helicopter landings as well as naval and air operations. So, there is scope for a bigger project and more than a few 'what-ifs'.