This is Michael Provence's study of the post-Ottoman Middle East and the former Ottoman figures who helped shape it. In the west, at least, our understanding of this period is fixed on the imperial characters like Lawrence of Arabia and the French General Gouraud. The 'line the sand' deal between Britain and France after WW1 defined imperial spheres of influence and fragmented the region into small and manageable national states. A fantasy world of their own invention. 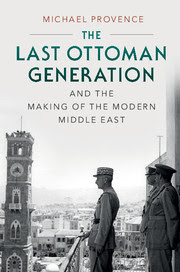 This book takes a different approach from the many national histories of the modern Middle East states. It looks at the region from the perspectives of the post-Ottoman citizens, many of whom did not regard the new order as an improvement. Its frame of reference is not the birth of something new but the death of something old and evolving, arguably even modernising. It studies the commonalities across the region that were clear to all until at least the 1940s.

One of the most interesting chapters deals with how the Ottomans administered the region. The state military and civil education systems and the generations of soldiers and administrators who progressed through it. Sultan Abdul-Hamid made specific efforts to increase the representation of non-Turkish students into the system, and Arabs were conscripted into the army. Modern infrastructure, including the railways and the telegraph system, also played a part in modernising the region and helped to spread new political ideas. They required trained workers, and technical schools were built to train technicians. 10,000 kilometres of railway line had been built by 1918.

The men who progressed through this system played an important role in the late Ottoman empire and formed an educated military elite, although still outnumbered by career officers who had risen through the ranks and were barely literate. The book gives many examples of the individuals who also went on to play a role in the post-Ottoman region.

Both the French and the British found their administration of the region under the mandate system costly. They tried a range of approaches, from adopting local elites to gerrymandering the boundaries and divide and rule strategies. Separating Lebanon from Syria is just one example. When they failed, they did counter-insurgency operations on the cheap. This often involved the use of air power to bomb and destroy rebel villages. The French mission civilitrice was anything but civilised for those killed or made homeless in these often random punishment attacks. Male villagers were occasionally gathered together and executed randomly.

The Turkish recovery in Anatolia led by Mustapha Kemal had limited benefits for those trying to emulate it in the Middle East. Ottoman Arab officers played a role in several insurgencies, but they got little support from the new Turkish republic. Former Ottoman Turks ridiculed the Arab leaders for abandoning the Ottoman Empire in favour of the British. They were focused on creating a Turkish state, not reinventing the Ottoman Empire. Other Ottoman-trained political leaders made political efforts through representations to the League of Nations to make a case for self-representation. These had limited success, and the notional independence of Iraq, and later Syria left real power in the hands of the British and French governments.

Ottoman rule may have delivered an imperfect system of rights and representation, but most of the population viewed it as more legitimate than the colonial regimes that replaced it. For the colonial powers, the occupations were expensive and provided few benefits. Their mandates gave the region its most enduring conflicts, most notably in Israel and Lebanon, and more recently in Iraq and Syria. The author accepts that former Ottoman army officers were as authoritarian as the colonial mandates, but those peoples who were most able to determine their own destiny have survived the events of the past century the best.

This is a different analysis of the post-Ottoman Middle East from conventional studies. All the key events are covered chronologically, but viewed from a regional perspective. Well worth a read.