This is the story, told by Graeme Sheppard, of how a clever piece of misinformation arguably brought an early end to WW1 and saved many lives. In 1918, there was a common belief in Bulgaria that there was a secret agreement with Germany for a three-year war that came to an end on 10 September 1918. It is argued that this is the basis for the collapse of the Bulgarian army in September 1918, which led to the German High Command recommending that Germany seek an armistice. 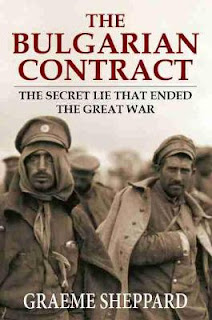 In fact, there was no such clause in the treaty that brought Bulgaria into the First World War on the side of the Central Powers. Instead, the story was likely invented by the Agrarian Party Leader, Alexander Stamboliski, to undermine the ruling Bulgarian Government.

The basis for the book is the story of two junior British officers, Robert Howe and John Cowan, who had been held as prisoners of war in Bulgaria for three years. They witnessed the Bulgarian capitulation first hand and even bluffed their way to Sofia, claiming to take over the city in the name of the British Army. Both officers went on to have long careers in the Foreign Office. Howe wrote about his experiences in unpublished memoirs, and Cowan corresponded with Cyril Falls, who wrote the official British history of the war. The story gets a footnote in the official history and a few references in Bulgarian histories. It is obliquely referenced in Ludendorff and Hindenburg's memoirs as well.

The author argues that Howe and Cowan are strong witnesses for the veracity of the contract. They both independently evidence the creedence given to it by Bulgarians and that its inventor was Alexander Stamboliski based on a brief discussion they had with him. Moreover, they enjoyed an extraordinary degree of freedom among ordinary Bulgarians in September 1918, spoke with them in their own language, ate, drank and did business with them. Finally, so convinced were the pair that the fighting would end that September that they returned to formal custody in expectation of their imminent release.

The contract is not mentioned in detail in the many studies of the period, and Stamboliski never claimed the credit. However, the author gives several credible explanations for this. French and British intelligence did not expect serious resistance from the Bulgarian Army before the Battle of Dobro Pole, leading to the Entente victory in Macedonia. The Bulgarian 2nd and 3rd Divisions collapsed, although the same was not true of the 9th Division facing the British at Doiran. The 9th Division was led by General Vasov, a competent commander who had successfully fought off the previous offensives.

Sheppard makes a convincing case for the existence of the contract. It was probably one of many plots Stamboliski invented from his prison cell, which he had good reasons for not mentioning later. The evidence for its impact is perhaps less strong, although, at the very least, it contributed to the Bulgarian collapse. That collapse certainly formed the basis for Hindenburg and Ludendorff's loss of confidence, following on from the defeats on the Western Front, particularly the Battle of Amiens. It is therefore fair to argue that this shortened the war and saved many lives.
So, it's a good story well told. However, I am not sure it qualifies for a book in its own right. Even allowing for some context, the story of the contract could be adequately told in a journal article. To turn it into a book requires a large amount of padding about the wider war in 1918, which is interesting but hardly new. The knowledgeable reader may want to skip more than a few chapters, but if you are new to the story of how WW1 ended, you will find this content useful.