I gave Sharp Practice 2 a positive review when it came out and played several games across the time period. It was certainly an improvement on the first edition. However, I have hardly played it since, and I suspect that's because the various Dan Mersey rule sets for the period have captured my attention. My midweek wargame club (Prestwick) isn't back playing yet because of problems with the venue, so when a member suggested a game at home with Sharp Practice, I dusted down my set of the rules.

We played a version of Scenario 6: The Rescue Mission, using French and British forces of the Peninsular War with 62 points per side. 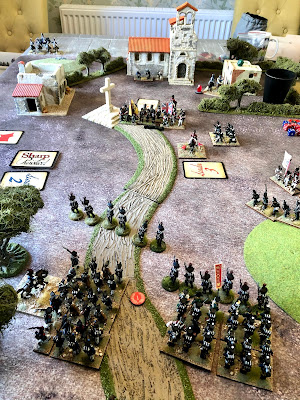 I am not a big fan of the overly random mechanisms the Lardies use in their rules, but fortunately, my French cavalry leader came out of the pack first and the same for my British opponent. This led to a cavalry clash which the British came off marginally better. 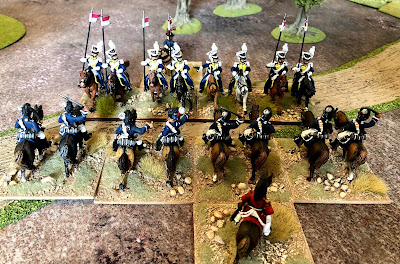 This allowed the meat of the battle to proceed with my two French columns crawling across the table while the British moved into position to block my access to the monastery. I say crawl because Sharp Practice uses variable movement. I have no problem with variable movement as an add on to a basic movement allowance. However, completely variable means infantry can move anything between 2" and 12" per turn by using both actions for movement. Therefore, the chances of completing this scenario, which required me to get to the monastery and back to the bridge (around 10ft), was nil. It also slows up the game necessarily.
The infantry battle used both of the special rules for the British and French, which makes a decent attempt to reflect the tactics of the period. The French won through, and that was largely that as the British morale was down to 0. So, I would have been able to walk into the monastery - if I had a spare evening for dice rolls! 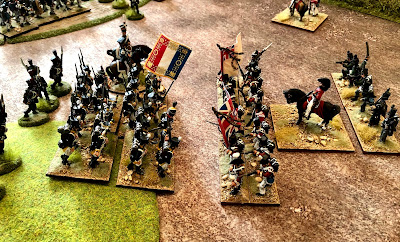 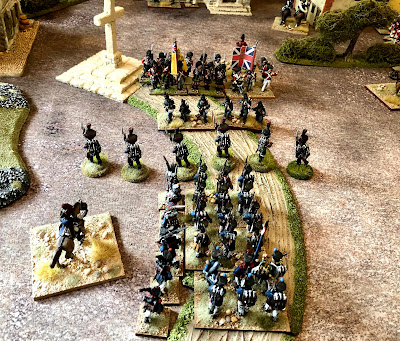 I'm sure we made a few errors and certainly spent a lot of time stuck in the rulebook. It may just be me, the pernickety lawyer, but there is some inconsistent use of language which can confuse. For example, 'withdrawal' and 'broken' are fine, but in Fisticuffs, we have 'thrown back'. I'm sure if I ploughed through the forum, there would be answers, but it irritated me. There were several other issues like this.
We struggled to remember to use the reload and present rules. It results in lots more markers cluttering up the table, and I am not sure it adds much to a game when both sides use the same technology. So I would lengthen the time frame and abstract the process. Otherwise, the firing and combat rules work fine. I was a bit surprised that my skirmishing Voltigiers had the option of standing rather than evading from a British line charge, although I can see circumstances in another time period where 'may' makes sense. You just have to use some common sense and do what the historical troops would have done.
Overall it was a fun game. The Tiffin card didn't break up the game too much, a big problem with the first edition. I do think the rules are unnecessarily complex in places, so I do prefer Rebels and Patriots. However, the narrative play is fun, and we will give it another go.
Posted by Balkandave at 11:05