The Turkish War of Independence: A Military History 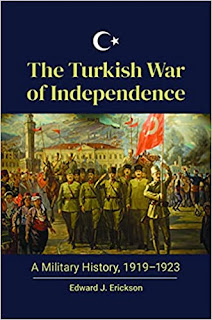 The book is organised chronologically, starting with the end of WW1and the creation of a Nationalist Army out of the remnants of the defeated Ottoman forces. Salvation and Catastrophe covers the political and diplomatic causes of the war in more detail while Erickson outlines these and cracks on with the Greek invasion and the First Inönü Campaign. This includes the less well-known campaign in Thrace, which successfully ejected Nationalist forces and brought the Greeks close to Istanbul. The narrative then shifts to the war against a wide range of insurgents and the Eastern Front campaigns against the short-lived Armenian Republic and the French occupation of Cicilia. Victory against Armenia led to a treaty with the Bolsheviks, and attacking the overstretched French forces caused them to withdraw to their mandates in Syria and Lebanon. The scale of the battles against the French was a surprise to me. For example, the French force at Gaziantepe totalled 13 infantry battalions and 15 artillery batteries. These victories allowed the Nationalists to shift troops and equipment to the main front against the advancing Greeks.

The rest of the book takes us through the Greek advances in the Second Inönü campaign, which drew the Greek forces closer to the nationalist capital Ankara. However, Mustafa Kemal (Ataturk) was trading space for time and to stretch the Greek forces, which were simply inadequate for such a huge operation at a time when they were losing international support. The Great Offensive destroyed the Greek armies and forced the remnants to evacuate. This brought the Nationalists facing the British occupation forces guarding Istanbul and the Straits.  This resulted in an armistice followed by the Treaty of Lausanne and the establishment of the Turkish Republic.

While the trenches and barbed wire of WW1 were present, this was a war of manoeuvre in which cavalry played an important role. The larger Nationalist cavalry units were able to outflank the Greeks and interdict their supplies and command structures. During the Battle of Sakarya, the Nationalist cavalry even managed to attack the Greek field army HQ. This was war on a large scale, with armies of up to 200,000 men on each side. Casualties are difficult to assess, but Konstantinos Travlos has a go in Appendix A. The Greeks lost around one-third of their army dead and wounded (over 60,000), with many more taken prisoner. The Nationalists about half the Greek casualties. Civilian casualties were massive with atrocities on both sides, compounded by the population exchanges that followed.

Erickson argues that the Great Offensive was one of the few successful examples of operational-level encirclements conducted before WW2. He ranks it with Tannenberg and Megiddo in this regard. Such an operation could only be delivered by highly trained staff officers who had been trained in the Ottoman war academy using doctrines learned from the Germans. Kemal, Fevzi and Inönü formed an effective command team, along with Karabekir on the eastern front. Railroads, the weather and the Anatolian geography all helped the nationalist victories.

This is an excellent operational history of the war or arguably wars. Each campaign is put into context, followed by the preparations, and each phase of the campaign is broken down into readable chunks. Then, finally, a conclusion which outlines the outcomes and the key lessons. The reader is left with a clear understanding of the war. Highly recommended.

I tried one of the lesser-known campaigns on the eastern front against the Armenian Republic for the tabletop. From the limited pictures, it seems that the Armenian army had a variety of uniforms and equipment. When you are struggling to arm your troops, nice uniforms are not a priority. So, some civilian dress and former Russian uniforms appear to have been the norm. I used my Russian figures of the period in 15mm, who look far too smart, but even for me, this is a project too far!

My choice of rules for this period is Bloody Big Battles. The armies were not large. With irregular militias incorporated, the Armenian army was about 20,000 men, and the Karabekir's XV Corps had 15,811 men plus irregular formations. This is quite a small battle for Bloody Big Battles to handle. The Turks attacked the rather too spread out Armenian position by pinning their left and concentrating the attack on the right-wing. They fairly quickly outflanked the Armenian right and rolled up the line. A historical outcome! 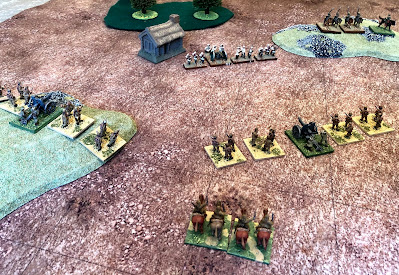 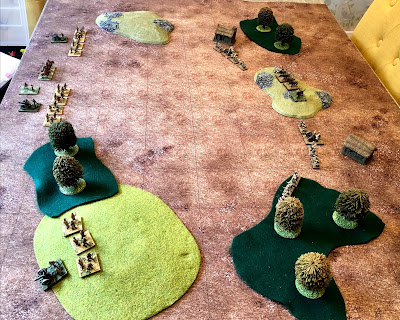 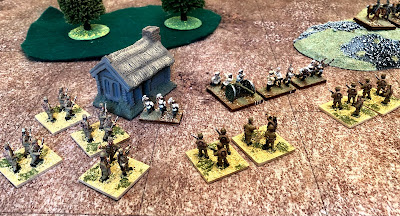