The Norway Campaign and the Rise of Churchill 1940

This year is the 80th anniversary of the Norway campaign of 1940. Sometimes forgotten in the light of the invasion of France, and it was the catalyst that brought Churchill to power in Britain. Somewhat ironically, as he hardly covered himself with glory during the campaign as First Lord of the Admiralty.

I have a few books on the campaign, but a new one was justified for the anniversary. Anthony Dix's account covers the campaign and the political events, primarily from a British perspective. I see you can get the Kindle edition for only £4.99 as I write. 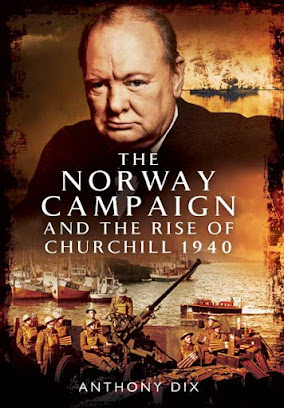 This book covers the background to the campaign in more detail than most studies I have read, including the political context, the Winter War in Finland, and the need to cut off iron ore supplies to Germany from Sweden via northern Norway. The German Operation Weserbung plan is outlined, which included the invasion of Denmark. This gave the Germans air superiority over southern Norway and secured German naval supply lines into Oslo.

The Germans had some time to plan the campaign, unlike the British who improvised a plan, and it showed. For example, Brigadier Morgan, commanding 148 Brigade, had received four sets of often conflicting orders by the time he landed in Norway. I did enjoy the story of the Leicesters arriving at a hotel in Lillehammer, only to be told by the manager that the hotel had already been booked over the telephone by the Germans as their intended headquarters and that the new guests were expected shortly!

Not all troops were properly equipped for fighting in the winter conditions and the Royal Navy did not help matters by shifting troops between ships. This resulted in units arriving without support weapons, ammunition and other essentials. No French or British units had ever fought north of the Arctic Circle. Bizarrely the French sent the Foreign Legion, more suited for the desert than the snow-covered expanse of Norway.

The Norwegian Army was only partially mobilised when the invasion began and so was ill-equipped to make the best use of the defensive terrain. I have driven north from Oslo and the terrain is ideally suited to the defence, so long as your forces have artillery support and at least some air cover. Sadly, neither applied to the Norwegian Army, and the insertion of Allied troops was done on an ad-hoc basis, often creating command confusion.

From a strategic point of view, while the Germans lost a similar number of ships to the Royal Navy, it was proportionately much greater. This included half their destroyers, three cruisers and serious damage to two battleships. It is also debatable if the gains in occupying Norway were worth it. Yes, they had airbases that could strike Scotland, naval options for Atlantic incursions and attacking the Russian convoys, as well as the iron ore route. However, the cost of coastal defence was huge, and even at the beginning of 1945, there were 350,000 Germans stationed in Norway who otherwise might have been used more profitably elsewhere.

An often forgotten strategic gain for the Allies was the contribution the Norweigan merchant marine and its 25,000 crewmen made to the Allied war effort, which could have been lost had Norway capitulated. However, this cannot hide the 1940 debacle, for which the blame must rest upon the organisation at most levels, the staff officers, the higher command, above all the politicians – which includes Churchill.

This book is a welcome addition to the history of the Norway campaign. It lacks detail on the Norwegian and German perspectives but it covered aspects of the Allied actions that I hadn't read before.